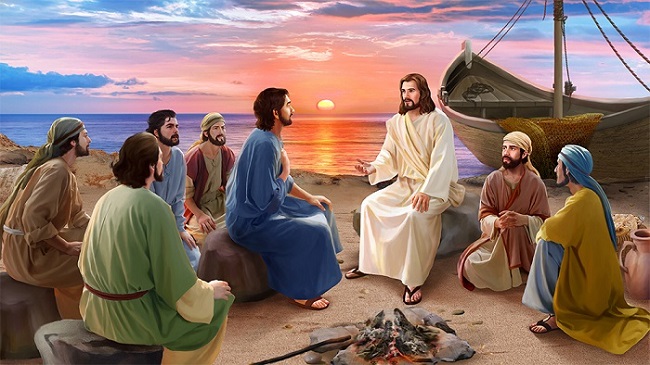 “Jesus said to them, ‘Come and have breakfast.’ Now none of the disciples dared ask him, ‘Who are you?‘ They knew it was the Lord. Jesus came and took the bread and gave it to them, and so with the fish. This was now the third time that Jesus was revealed to the disciples after he was raised from the dead.” (John 21:12-14)

Some weeks after Jesus had risen from the dead, He found His disciples fishing on the shore of the Sea of Galilee. It seems rather curious that John records the fact that the disciples did not ask Jesus “Who are you?” After all Jesus had appeared to His disciples only twice after His Resurrection and so they were beginning to get used to the fact that He had risen miraculously from the dead. Yet such an idea was still unbelievable as it did not correspond with reality.

For this same reason, billions of people in our world cannot believe in Jesus. His atoning sacrifice on the cross of Calvary contradicts reason and the sense of human pride and autonomy. His resurrection from the dead is considered illogical and scientifically impossible and, therefore, unbelievable.

And yet the truth of atonement and resurrection are understood and accepted only by the eyes of faith. John and the disciples believed because they saw the risen Lord with their own eyes. They were convinced of the truth and so went forth to preach the glorious gospel of their Risen Lord. Almost all of them died for what they knew to be the truth. And we have their testimonies written down for us.

That gospel is the same we preach today, a simple yet glorious truth of love and mercy that stands on its own, told without gimmicks, CGI, radiant music, or intricate theological arguments. People who hear that story of death and resurrection continue to ask that question of Jesus “Who are you?” Those who ask that question with a flippant and dismissive attitude do so because they feel no need to accept the help of God to earn their way into heaven. Billions prefer to think that they can attain peace with God or the universe by their own efforts. Those who depend on self for eternal salvation will be cast into eternal darkness.

On the other hand, many who ask of Jesus “Who are you?” have been humbled by life’s circumstances, by their own sinfulness and failure. Such are the poor, the downtrodden, the losers of the world. Those who ask with sincerity, hope, and faith the Lord takes into His Kingdom. And such are we. Because of the gift of faith given to us who are not worthy, we can look forward to sitting down to eat the eternal wedding feast of the lamb in the presence of the Lord, just as the disciples sat down to eat breakfast with the risen Jesus.