The Message of the Church 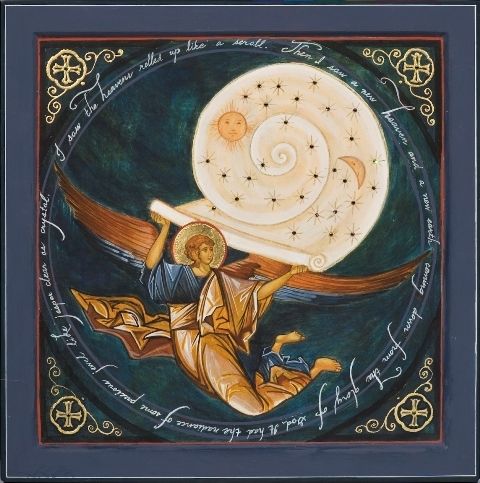 Then I saw another angel flying in midair, and he had the eternal gospel to proclaim to those who live on the earth–to every nation, tribe, language and people. He said in a loud voice, ‘Fear God and give him glory, because the hour of his judgment has come. Worship him who made the heavens, the earth, the sea and the springs of water.'” (Revelation 14:6-7)

Angels figure quite prominently in the book of Revelation, right from the beginning. An angel appeared to John and delivered to him the words and images we find so fascinating and  enigmatic. An angel stands over or represents each of the 7 churches that the Lord addresses. Here an angel delivers the gospel to all the world, followed by the warning of God’s imminent judgment. This is a bit strange when we consider that the proclamation of the gospel is the responsibility of the church, that is, believers, not supernatural beings. Yet angels are, essentially, messengers of God, so this angel that John sees here is the Church.

The Lord Jesus commissioned His disciples, the Church, to preach the gospel of grace through faith. Yet down through the ensuing centuries that message became eclipsed by Law, a new law that transformed the gospel into a system composed of manmade rules and precepts enforced by a cumbersome, harsh and elitist bureaucracy. This new law that was as difficult to keep as the Mosaic law, yet full of loopholes which allowed many to take advantage of or abuse the system. In 1517, Martin Luther stood up and restored the gospel of grace back to the center of the Church. The eternal Gospel which had been obscured was once again proclaimed for all the world to hear.

Now this gospel is once again being eclipsed by philosophy, lust, selfishness, hatred and self-righteousness. The message of the Church is being silenced by the forces of darkness working through the media, the government, and the church itself. The gospel is being compromised in favor of political correctness, cancel culture, and identity politics. Instead of truth we hear lies from all sources. And yet the gospel of salvation by faith in Jesus is the only way to peace with God and man. And so, in the midst of the chaos and the shouting, we in the Church must take up our calling to preach the gospel. This good news will go forth to despairing sinners to let them know of God’s offer of mercy and grace.