The Alpha and Omega 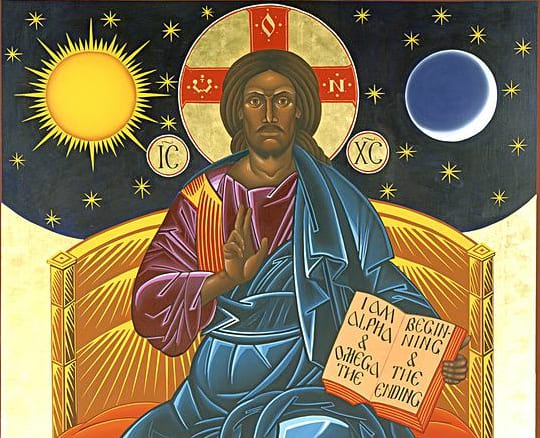 As we ponder the opening vision of the Book of Revelation we note the similarities this vision shares with the words from Daniel 7. Now Daniel had depicted the Lord God Almighty as the Ancient of Days. Yet here in Revelation, the Apostle John reveals depicts Jesus in His divine glory. In fact, the whole book is a revelation of Jesus, a testimony of His glory and love. Here we ought to be awestruck by John’s designation of Him as the Alpha and the Omega. This title reveals that Jesus is the totality of all existence, the creator of all that is, the fulfillment and essence of God’s will. Because He is, we would be wise to heed all He has to say for it will encourage and help us as we live out our lives for Him. We bow down and worship Him who has in His love chosen us!

What Jesus says was of particular and primary relevance to believers in those churches that existed in the first century, so it was presented in terms that they could understand easily but which we in the 21st Century struggle to understand. The message the visions reveal concerned what God was about to do. This was meant to edify and encourage all Christians including all down through the centuries including the present day. Those first century Christians lived in the Roman Empire. They were undergoing severe persecution, yet despite what they were experiencing, the Lord God was with them. Jesus was in control of all that was going on. Jesus is in control of all that has taken place throughout all history and even in our present day. The end of all things is not in doubt. He has already won the final victory.

This message would comfort our early Christian brethren as they endured suffering, violence,  and even martyrdom for the Lord revealed that their reward is in heaven not on this earth. It should comfort us as well though perhaps we Christians in America have not yet experienced such persecution as they did though it is taking place across the globe particularly China and in parts of Africa and the Middle East. Here in US the demonic assaults come from a culture that idolizes sexual immorality, self-centeredness, science, and wokeism. Ungodliness is promulgated by the woke media, the government, and academia. Those who do not agree are ostracized and abused. But we Christians can stand firm knowing that we are in the Lord’s hands. Those who hate us and the gospel are to be pitied for they do not know the Lord Jesus as the Alpha and Omega. His word is the truth they need to heed.