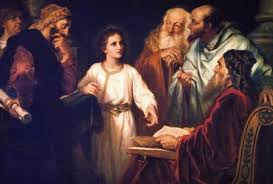 “And they did not understand the saying that he spoke to them. And he went down with them and came to Nazareth and was submissive to them. And his mother treasured up all these things in her heart. And Jesus increased in wisdom and in stature and in favor with God and man.” (Luke 2:50-52, ESV)

The passage from Luke shows us that the boy Jesus knew, understood respected and loved the Law of God. He also respected and obeyed earthly authority as represented by the teachers of the Law, the scribes and Pharisees. These men were amazed at what he said, his level of understanding and the depth of his wisdom. Naturally a 12 year old with such depth would be considered a wonder or a curiosity. Maybe some of them approved of and agreed with what he said. But one can be amazed without agreeing. Perhaps some of them did not like the implications of some of his answers, but since he was just a young boy, he was not a threat. Yet when he said the same things 18 years later many of these very same teachers would gnash their teeth at Him and call for his death. But for the moment they could marvel, pat him on the head and say, “Smart kid,” and return to their legalistic hair splitting and hypocrisy.

Today a boy like Jesus would be deemed a child prodigy and would be the subject of widespread media coverage. But I am certain no child prodigy ever presented themselves with the humility and respect that Jesus displayed. Many kids today who possess a great deal of knowledge also possess inflated egos and lack respect for authority. People are not necessarily amazed at such children as they are annoyed. Kids like that can be mean, rude, self-centered, disrespectful, and disobedient. And judging by all the harsh and unkind words we have heard on social media over the last months, adults are just as cruel. A little knowledge can make a person feel important and arrogant. But wisdom, unlike knowledge and intelligence, comes from God and is characterized by humility, mercy, and love.

Thus, we must all learn from the example of Jesus. He had not just knowledge but wisdom, understanding, sensitivity, and humility. He was not playing games with the scribes to show them up or boost his ego. He had sought them out so he could sit with them, listen, ask questions, give answers to their questions, learn more, and in the process teach them. In addition, Jesus submitted humbly to their authority and the authority of His parents by leaving with them and going back to Nazareth. All of us could profit from observing and following Jesus’ example of humble obedience and respect for authority, even if we think we know better, but we usually do not. And we should pray for our elected leaders and officials that the Lord God would bless them with wisdom and lead them to His Kingdom. That would bless us all.