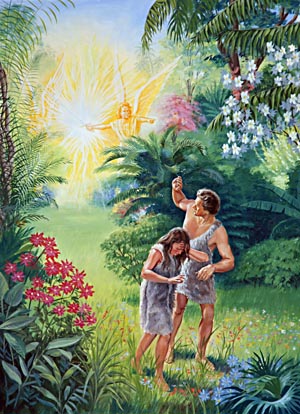 Not a week goes by these days it would seem that some new revelation comes our about some celebrity or politician. These revelations come from supposed witnesses or victims of that person detailing some sort of sexual misconduct or fiscal irresponsibility or even some statement they made on social media that offended someone. Those accused rarely admit their sinfulness or impropriety because they don’t want to admit guilt. The usual response they make is to shift blame to someone else or make up some sort excuse that somehow absolves them. Even people who riot, loot, and destroy property claim their actions are caused by others who have provoked them or treated them unjustly.

No such excuse has any merit before Almighty God. Everyone is held accountable for his or her own actions. All stand condemned before God. There is no use in shifting blame. We see this in the Garden of Eden. Adam and Eve had disobeyed God. They knew they had to hide from Him for they felt guilt and shame. Their sin had broken their fellowship with God. Now neither Adam and Eve trusted Him. They were afraid of Him. Consequently, neither of them took responsibilityfor their sin. Adam blamed Eve and, by implication, God, because God had given her to him. Similarly, Eve tried to shift the blame to the serpent, the devil. In doing so she admitted that she had disobeyed but claimed she had an excuse. Almighty God held each responsible for what they had done and punished each of them.

When we sin we too try to we shift blame, refuse to admit our guilt or claim some sort of excuse. But explanations and excuses do remove the guilt. God’s Law condemns without mercy or exception or excuse. There are no special circumstances. It is not someone else’s fault.

This is why God promised to send a Savior. The Messiah would come and receive a severe wound. Yet that Messiah would conquer Satan the evil one decisively. Jesus is that promised Messiah who came to make us right with God, to restore us to Eden and into full fellowship with Almighty God. Now we no longer need to be afraid of God for we can, by faith, trust in His promise of eternal life through the body and blood of Jesus.