My Lord and My God! 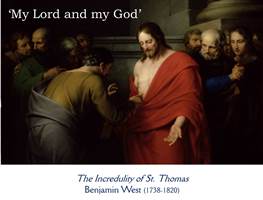 “Then he said to Thomas, ‘Put your finger here, and see my hands; and put out your hand, and place it in my side. Do not disbelieve, but believe.’ Thomas answered him, ‘My Lord and my God!’ Jesus said to him, ‘Have you believed because you have seen me? Blessed are those who have not seen and yet have believed.’“ (John 20:27-29)

Many people these days refuse to believe in Jesus, that is, they refuse to believe that He is the Son of God who died and rose from the dead. The reason for their rejection may be due to their assumption the accounts of Jesus’ miracles are not scientifically possible or verifiable. Neither is His Resurrection from the dead. Many people believe in science, that is, what cannot be seen orexplained scientifically cannot possibly be true.

Those who reject the miraculous as displayed by Jesus are sad indeed for they miss out on the greatest of blessings and joy. They could learn a lesson from the Apostle Thomas. He was not present the night of the resurrection to witness the appearance of Jesus to His disciples. When his fellow disciples told him they had seen Jesus, he rejected their testimony even after hearing their vivid description of Jesus and the wounds in his hands and side. He was very passionate in his unbelief. He would never believe by merely seeing Jesus. He had to place his fingers in the wounds the nails left in Jesus hands. He had to thrust his hand into the gaping wound the spear left in Jesus’ side. He had to touch to be sure because he was afraid to hope that this great news was true.

Despite his skepticism, Thomas was rewarded with an astonishing blessing: not only did He see the risen Lord, but he was blessed to proclaim an earth-shaking revelation! We are not told that he actually touched Jesus; He did not have to for he saw Jesus alive yet with the mortal wounds on his body. Thomas was so overcome with passion, joy, and faith as he witnessed this great reality that he proclaimed “My Lord and My God!” Not just Lord in the sense of Master or teacher, but Lord in the ultimate sense: “Jesus you are God. Only God can do this great miracle.” This is the supreme statement of who Jesus is, the supreme testimony of faith.

Would that we would daily be overcome with such passion over this glorious truth. The Apostle John was. Years later as he wrote this he was overcome with emotion as he recalled the vivid memory of that night and the words of faith that no one has ever said in such a way! “My Lord and My God!” John tells us that all the signs and miracles he has recorded in his gospel account culminated in this the greatest sign, the glorified body of the risen Christ, and in this greatest affirmation of faith. John was so overcome with such joy that he offered an invitation to his readers, including us today. “Then Jesus told him, “Because you have seen me, you have believed; blessed are those who have not seen and yet have believed.” That means John’s readers. That means you and me. We have not seen but are blessed because we have believed.