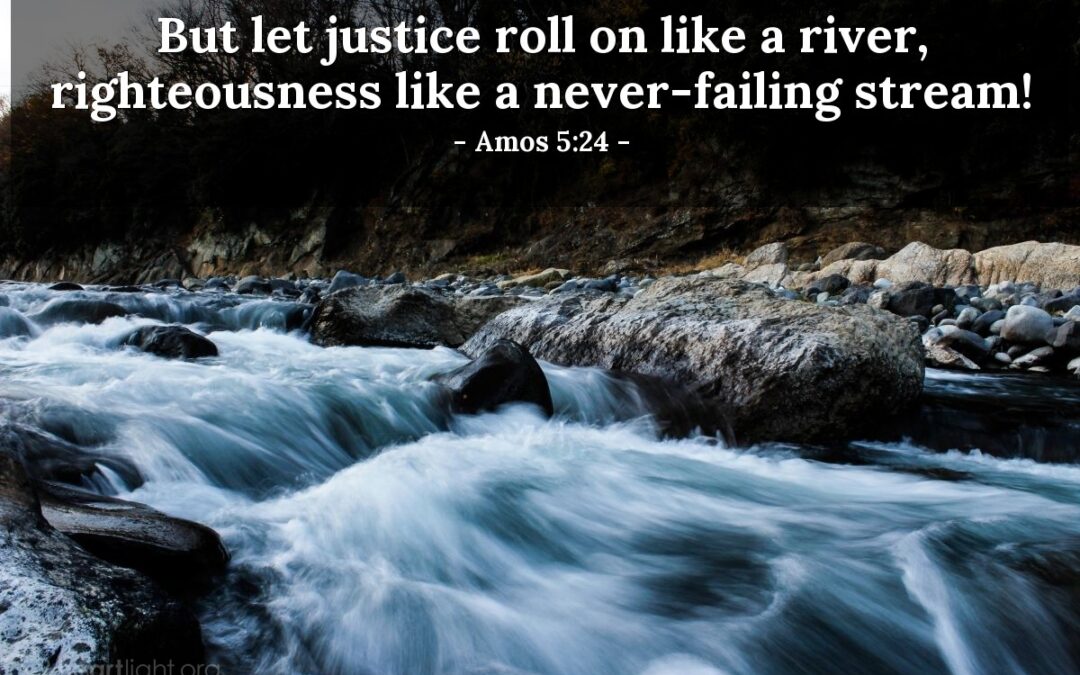 “I hate, I despise your feasts, and I take no delight in your solemn assemblies. Even though you offer me your burnt offerings and grain offerings, I will not accept them; and the peace offerings of your fattened animals, I will not look upon them. Take away from me the noise of your songs; to the melody of your harps I will not listen. But let justice roll down like waters, and righteousness like an ever-flowing stream.” (Amos 5:21-24)

Amos the prophet mentions a topic that concerns many in America today: justice. But he pairs it with righteousness. This tells us that justice arises from righteousness. However, righteousness cannot be forced on us by the government, the media, or any ideological movements. Righteousness is both godly behavior as well as right standing before God. Thus, righteousness is imparted to us only by Jesus through faith in Him. Such faith confesses that He fulfilled God’s justice on the cross on behalf of all of us sinners. So if we want real and lasting justice we must be righteous but we can be righteous only by faith in Jesus.

Amos had uttered these words about justice in a funeral elegy that marked the death of Israel. The elegy described the tragedy that would soon befall the people as contrasted with their present life of ease. One of their specific covenant violations was their misuse of the legal system that had sprung up around the Mosaic law, a system which the people of Judah used to exploit and defraud the poor and needy. The leaders of the people took bribes and showed favoritism that deprived many of justice. They engaged in lying, cheating, and theft of property. Amos let them know quite openly that they did not know God or appreciate His power. He called on them to seek justice and mercy for the poor and downtrodden or face the consequences.

These words of Amos should serve as a warning to all Christians in these days of political chaos. The Lord will punish all injustice not just that which affects racial or ethnic minorities. He will punish the injustice of abortion, lying, cheating, violence, and the exploitation of other human beings for pleasure and profit. Indeed, perhaps He is doing that already for to be trapped in sin brings consequences and suffering. But the Lord desires that His people treat all human beings with fairness, equity, and mercy. Thus justice is tempered with mercy as it is accomplished through faith and faith comes by hearing the word of the gospel.