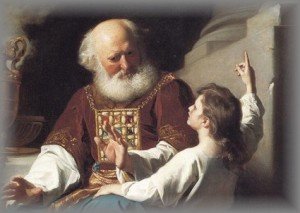 “Then Eli perceived that the Lord was calling the boy. Therefore Eli said to Samuel, ‘Go, lie down, and if he calls you, you shall say, “‘Speak, Lord, for your servant hears.”’ So Samuel went and lay down in his place. And the Lord came and stood, calling as at other times, ‘Samuel! Samuel!’ And Samuel said, ‘Speak, for your servant hears.'” (1 Samuel 3:8a-10)

This passage relates the actual call of Samuel. This occurred during a time of darkness for Israel. She lacked spiritual leadership and her people had fallen prey to the surrounding pagan nations and their false gods. They had abandoned God but He had not abandoned them.

The reason why Eli was slow to realize that it was the Lord was speaking to Samuel was that he did not know the voice of the Lord. Though he was a priest and a judge, he lacked spiritual discernment. The only time he had heard the Lord speak was through an unnamed prophet who had delivered a dire prophecy in the preceding chapter. The Lord reinforced that warning to Samuel as we see in the ensuing verses by the Lord to Samuel.

Samuel was the first to hear the voice of the Lord in many years. Moses had spoken to God face to face, while Joshua had to rely on the High Priest. None of the other judges heard God’s voice as did Samuel, and none of them had his authority, giftedness and power. That is why the scripture says “none of his words fell to the ground.” It simply means that his prophecies were always true and right. It is because he spoke only what the Lord told him to say.

In this time of pandemic we live in the midst of moral and spiritual chaos. Many people are doing what is right in their own eyes. This is because their worldview is based on what our media and culture promotes. Our culture teaches us that truth is not absolute but relative to our own experience and desires. We believers are daily influenced by this ungodly worldview. Would that we could hear the voice of the Lord as easily as did Samuel. We hear so many teachings and weighty philosophical and social utterances in our culture through the media that it is hard to discern truth from lie, fake news and opinion from reality. Yet we need no audible voices or prophetic utterances. We have other means: the Word of God as well as the Church and godly and humble pastors and teachers who are filled with God’s wisdom drawn from His Word. It is up to us to exercise our faith so that when the Lord speaks we listen and obey.