Go and Preach the Gospel. 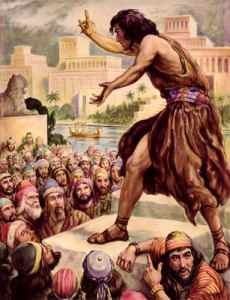 “Jonah began to go into the city, going a day’s journey. And he called out, “Yet forty days, and Nineveh shall be overthrown!” And the people of Nineveh believed God. They called for a fast and put on sackcloth, from the greatest of them to the least of them.
When God saw what they did, how they turned from their evil way, God relented of the disaster that he had said he would do to them, and he did not do it.” (Jonah 3:4-5, 10)

These days of pandemic and social distancing may have made us forget that the church of Jesus Christ is a sanctuary as well as the center of God’s Kingdom on earth. In fact, the church is the only place we can go to find the real hope and encouragement that we need to endure and prevail through such chaos, chaos resulting not just from politics and pandemic but also from the millions of self-proclaimed experts who inhabit social and broadcast media, all with opinions, all claiming to be right, infallible authorities on all sorts of topics with conclusive answers to the nation’s and the world’s problems as well as the means to achieve happiness and unity. They have rejected the church as the source of God’s Word and Truth, disparaged that Word as ludicrous and obsolete.

But the Church is still the Temple of the Lord, a refuge and shelter from the storms and cares of life, as well as from a culture that has grown increasingly worldly, selfish, immoral, and openly hostile to the message of the Gospel. It is in church, in the assembly of believers, not the media, the marketplace, the public square, or academia that we meet with God by His Spirit, in His word, the sacrament of the altar, and the fellowship of the saints. Here we find God’s mercy that forgives us our sins. Here we find truth, strength, and hope to sustain us as we daily interact with this immoral and chaotic world.

The church should also be a sanctuary of mercy and hope to unbelievers as well. We are Christ’s ambassadors, called to minister in the midst of an alien world for the interests of the Kingdom of God. We are to minister to the needs of the lost with what we received from our Lord. Often, however, our actions and attitudes carry the opposite message, that is, that we don’t like outsiders, people who are different from us, people of other cultures, people who are immoral, and sinners in general. We don’t want to share the hope that we have with them.

Jonah felt that way about the sinful people of Nineveh. Jonah did not like God’s idea of so easily forgiving people who deserved punishment. He was angry with God. Yes God is just and holy. He must punish sin. Yet God loves to extend mercy to people who do not deserve it. As we also know or should know, the sins of those who repent and are forgiven don’t go unpunished. God Himself suffered the punishment for sin in the person of Jesus. On the cross Jesus suffered the punishment for the sins of all mankind. He took our place because we human beings could never become righteous by our actions or deeds. All have sinned and fallen short of God’s glory. It is as God’s love and compassion that made up for our helplessness. So we ought to preach the gospel Jonah preached but with an attitude of joy and thanksgiving as God uses us as His instruments of mercy.