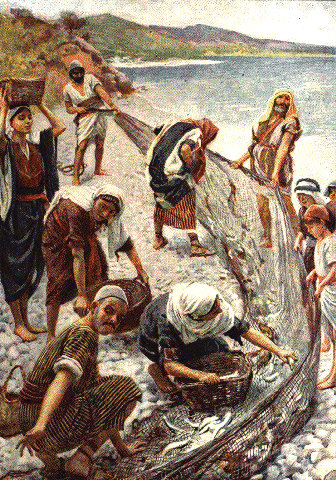 “Again, the kingdom of heaven is like a net that was thrown into the sea and gathered fish of every kind. When it was full, men drew it ashore and sat down and sorted the good into containers but threw away the bad. So it will be at the end of the age. The angels will come out and separate the evil from the righteous and throw them into the fiery furnace. (Matthew 13:47-50)

In these parables, Jesus is teaching about the Kingdom of God. The Kingdom of God is like a fishnet, or a pearl, or a treasure. There are at least two different aspects of the Kingdom that Jesus is trying to convey in these short parables. First, the kingdom is like a man who buys a fine pearl or a field with a treasure in it. Both of these items represent us, human beings, those whom God calls. We are a very precious item which Jesushas purchased and redeemed with the cost of His own humiliation and death at the hands of sinful men. Secondly, the kingdom is like that man who buys a field to get a treasurehidden in it. Most of the field lacks treasure, but the man has to buy the whole thing in order to get the valuable part. Similarly, the dragnet takes in many edible fish as well as items that are unclean. The whole may look impressive, but the sorting done after the net is brought in to shore reduces that considerably.

The parable about the dragnet, as well as the other preceding parables, appears to speak about the outward nature of the Kingdom of God. That Kingdom, the one we can see on earth, seems to be huge but its size is highly inflated. Not everyone who is connected to it belongs in it. Like one of the preceding parables there are weeds mixed in with the good wheat. So it is with the church. There are many who profess to be Christians, currently almost 2 and a half billion by most assessments, making Christianity the largest world religion in terms of numbers. If this is true, then why isn’t the world experiencingmore peace and love?

The sad fact is that only the Lord knows how many of these are true believers. Many are Christians in name only whose religious beliefs represent a pastiche of worldliness, lies, other religions, and the identity politics pushed by the media and academia. Others are simply false prophets out to amass fame and prosperity for themselves. These are all deceived. The Lord,when He returns at the end of time, will sort things out. He knows those who are His and will preserve them unto eternal life. In these troubling times, we believers can know that the Lord will vindicate His own, for He is always faithful to His covenant.