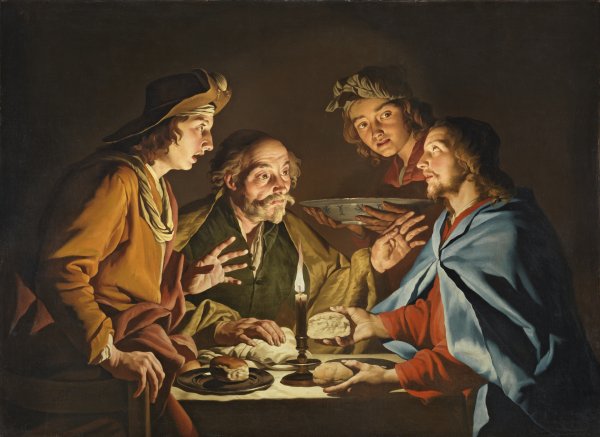 “Then he opened their minds to understand the Scriptures, and said to them, ‘Thus it is written, that the Christ should suffer and on the third day rise from the dead, and that repentance and forgiveness of sins should be proclaimed in his name to all nations, beginning from Jerusalem. You are witnesses of these things. And behold, I am sending the promise of my Father upon you. But stay in the city until you are clothed with power from on high.’”(Luke 24:45-49)

Luke related the testimony of the two men who met Jesus on the road to Emmaus. These two were so overcome by their meeting with the risen Lord that, as soon as they could, they ran back to Jerusalem to tell the disciples of their encounter. While they were speaking, Jesus appeared in their midst to comfort His followers and show them that He had indeed risen from the dead. At first He gently chastised them for their failure to believe, failure to recall that He had told them exactly what would happen. Then He opened their minds to understand all He had taught, something which He had done with the two on the way to Emmaus.

Jesus further cautioned the disciples to wait in Jerusalem until they had received the anointing of the Holy Spirit. Such a cautionary word was needed perhaps because they may have wanted to rush out and tell their friends, relatives and neighbors the good news or perhaps to gloat in the face of the Pharisees. Such acts would be dangerous, foolhardy and, to some degree, selfish. They would be unprepared for the vitriol and violence that would be hurled at them, for most would reject their words and testimony. The disciples had to be prepared for all that, prepared also to speak with love and compassion as the Lord led, when and where He chose.

That is good advice for us too. Most of us Christians these days are just unwilling or afraid to share the good news of the gospel. We think we don’t know enough, we don’t know how to answer questions and objections, or we are just too introverted and shy so we are not inclined to rush out and share the good news about Jesus. But God has called all His disciples to do so. Without our testimony, many people will die in unbelief bound for eternal destruction. Jesus desires we speak the truth of the gospel to all we meet. He has given us His Holy Spirit who will guide and instruct us as the need arises and as we wait on Him and pray.