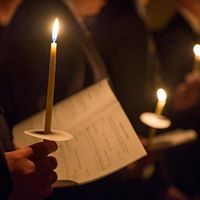 “Your words have been hard against me, says the Lord. But you say, ‘How have we spoken against you?’ You have said, ‘It is vain to serve God. What is the profit of our keeping his charge or of walking as in mourning before the Lord of hosts? And now we call the arrogant blessed. Evildoers not only prosper but they put God to the test and they escape.’” (Malachi 3:13-15)

The words of Malachi present a portrait of the Jewish people following their return from exile in Babylon. Apparently many of them had not learned their lesson from what they and their ancestors had endured. They became skeptical and irreverent. They turned their backs on the Lord preferring to live as they chose because they felt that there was no profit or advantage to serving Him. They thought life easier and more satisfying on their own without Him telling them what to do or how to live. But the Lord told those who sought Him earnestly that He would act justly and kindly. He would eventually make things right and bless those who served Him.

As we read the words of Malachi we should realize how much our present world, our society mirrors that of the ancient Jews. Many have abandoned the Christian faith that is the cornerstone of modern civilization in favor of esoteric religions, gross idolatry and humanistic philosophy. They have turned away from the church deeming it irrelevant or constricting. Many have even co-opted the church and refashioned it in their own image by redefining sin and watering down the gospel in order to make it more palatable and relevant to the modern generations.

Today, as in the days of Malachi, the Lord has been displaced as the ruler and sustainer of all creation, replaced by man as the central focus of the gospel. Consequently human beings make up the rules as they wish according to what is popular and trendy or what feels good or pleasurable. What the Word of God calls sin and wickedness is now called good, or just a lifestyle choice. Righteousness is now condemned as old fashioned and intolerant. The gospel of righteousness, charity, obedience and self-sacrifice has been replaced with egotism and self-exaltation. The church must continue to preach against this trend. We must hold fast to the truth, unpopular as it seems to be, that Eternal life is found only by faith in Christ Jesus.